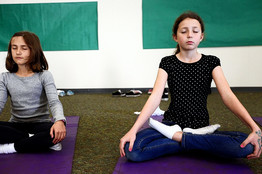 Sandy Huffaker for The Wall Street Journal
By EMILY GLAZER

Yoga for children is taking off in studios, hospitals and schools across the country, as parents look for new activities that can help motor skills development and even behavioral problems.

Yoga isn’t just good exercise for adults. A growing number of schools, hospitals and studios say it can also be a boon to kids, helping them relax and focus, and improve their flexibility.

A 2003 study by California State University, Los Angeles found that yoga improved students’ behavior, physical health and academic performance, as well as attitudes toward themselves. That same year, Leipzig University reported that yoga reduces feelings of helplessness and aggression, and in the long term helps emotional balance. The benefits of yoga are particularly strong among children with special needs, research shows.

Now thousands of schools across the country—as well as yoga studios and hospitals—are adding programs that teach children to do the exercises.

In January, Paul Ecke Central Elementary School in Southern California added yoga to its curriculum for 650 students at $20,000 a year. Principal Adriana Chavarin says she has seen how calm and centered students are after practicing the techniques. At a recent assembly, students were getting restless as they sat on the floor. Then a few sixth graders spontaneously led the rest in yoga poses and breathing exercises.

“Every kid in the audience quieted down,” says David Miyashiro, the district superintendent. “It’s a different language they all speak now.”

Before statewide testing in May, Paul Ecke’s teachers plan to lead students in yoga to help them concentrate and stay calm. Mr. Miyashiro, meanwhile, is working to expand the program to the entire Encinitas Union School District.

Nearby, the San Diego Center for Children received more than $1.3 million from California’s Mental Health Services Act Innovation grant in February to start a wellness program, which includes yoga. And the psychiatric unit at the Children’s Hospital of Colorado uses yoga with children ages four to 20 who suffer from issues such as mood disorders, eating disorders or autism, says Michelle Fury, the hospital’s yoga therapist.

Getting kids to stretch and bend often takes a bit of creativity. Donna Freeman, a yoga instructor in St. Albert, Canada, builds classes around themes. With a beach theme, for instance, she’ll tell a simple story by going through a variety of poses that suggest seaside scenery or activities, such as a tree pose to suggest looking at palms, then boat and fish poses to represent being out on the water. During the Chinese New Year, she taught a class around animals in the zodiac, such as the rabbit or snake.

Yoga “helps to improve self management,” Ms. Freeman says. “Children learn where their body ends and where it begins.”

Still, not all parents are on board with the practice. In some cases, parents have raised religious objections to yoga, saying that it’s a form of worship that conflicts with their beliefs. So, some instructors avoid certain phrases and exercise positions that have spiritual connotations. Or they substitute others: At Chabad schools in New York, for instance, children say “shalom” instead of the traditional “om.”

Some doctors, meanwhile, agree that yoga for kids can be beneficial—but they say it’s not as revolutionary as its boosters argue. Kathi Kemper, a professor at the Center for Integrative Medicine at the Wake Forest University School of Medicine, says children’s yoga helps with cardiovascular fitness and cognitive development. But she says you can get the same benefits from other common exercises, such as ballet or weight lifting, by focusing on your breathing while you’re working out and setting aside time to breathe deeply and relax afterward.

Yoga “might be helpful for people to manage emotions and thoughts,” Dr. Kemper says. But “people can exaggerate the benefits of just about anything.”

For a great video included in the article click here!

Ms. Glazer is a staff reporter in The Wall Street Journal’s New York bureau. She can be reached at emily.glazer@wsj.com.