Downward-Facing Dog for the Diaper Set 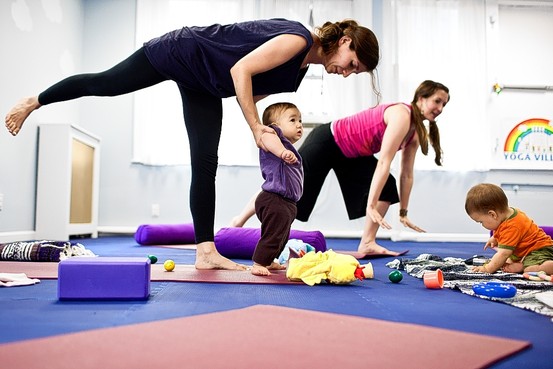 It isn’t news that yoga has become mainstream in the U.S. Almost 15.8 million Americans chant “om” and move into positions like downward dog and warrior to balance their bodies and calm their minds, according to the magazine, Yoga Journal. But can this popular exercise help wriggling toddlers achieve inner peace?

A growing number of classes around the U.S. and DVD programs insist kids can reap all the benefits of yoga but in a less- structured format. They say that yoga is calming for children, teaches them more awareness about their bodies and even helps with their development.

But Punam Kashyap, a senior developmental and behavioral pediatrician at the Institute of Child Development at the Joseph Sanzari Children’s Hospital in Hackensack, N.J., says there is very little evidence that the practice can have a positive effect on young children. “It’s a theory, not a fact that yoga can calm babies,” she says. “That said, as long as your child is having fun in a class, it’s not going to harm them in any way.”

As parents, we were curious if yoga would do anything to mellow out our small children. We tested three classes and a DVD for comparison.

The first place we visited was Yoga Village NYC, a two-month-old studio in Manhattan that caters primarily to kids and families. We took our 2-year-old daughter to Little Yogis, a 45-minute class for 2-to-4-year-olds that is supposed to make them less anxious and increase their strength and flexibility. We were immediately drawn in by the cheery space with sky-blue walls and painted clouds, and kid-friendly props such as stuffed animals dotted the room.

To start off, our baby and the other child participant were led through a series of animal postures by the friendly teacher. The kids squatted like a frog and made croaking sounds. They lay on their stomachs and reared their heads to hiss like a snake, and made cat and cow noises as they were directed into those positions. Every exercise worked a body part, like the legs, shoulders or back, in a fun way. The teacher helped the tykes work their core, for example, by having them lie down and hold an end of a stuffed snake while she held the other end and pulled them up.

The kids’ version of the classic yoga-class ending of shavasana, or relaxation, was having them lie down with stuffed animals on their bellies and have them watch the animals rise and fall as they took deep breaths.

The class allowed for lots of movement and freedom. Our daughter was more excited, not calmer. Despite the best efforts of the teacher, our toddler spent most of the time running around and shrieking. Owner Carrin Stratford says this response is common for first timers and there are no expectations for young children to follow every exercise.

Next, we tried Karma Kids Yoga in New York with our year-old daughter. The hour-long class for parents and kids combines yoga for adults and yoga-like activities for babies up to crawling age. During the adult-focused first half of class, babies can play with the provided toys or just hang out. While we were practicing, our daughter was crawling around checking out the other babies.

The second part of class got the kids involved. Our daughter laughed and smiled when we helped her get into downward dog and the plank, and other postures while songs played. While she was reluctant to hold still for the poses, she was thrilled to play with the new toys.

We liked that there was no pressure to keep the children focused on the exercises. Parents float in and out of the studio as they took breaks to feed their children. The end had the traditional lie-down and calming period, which is nearly impossible for older babies like ours who are constantly moving. So we ducked out early and didn’t get any stares because of it.

Our final visit was to Yoga Yoga, which has five locations in Austin, Texas. We took our 3-month-old son to a 75-minute postnatal class that is meant for moms to get a little yoga in and for babies to get some movement to help their development.

After a short breathing exercise, moms did some basic postures such as downward dog and sun salutations. Though some babies fussed and moms had to take breaks to nurse or soothe them, our son lay happily on the mat.

After about 20 minutes, we made a big circle and sang a few songs to our kids such as a funny New Age version of “The Itsy Bitsy Spider” before we laid them down on the mats to stretch them out. Our son smiled and giggled as we moved his arms and legs in various directions. Our son was happy for most of the session and only got a little cranky during the final relaxation period. We’ve gone back several more times, but it’s difficult to judge if the classes make him any calmer as he’s a pretty mellow guy in general.

We then turned to a DVD with YogaKids, a three-disc series for kids ages 3 to 6. Our toddler daughter was instantly transfixed by the soothing voice that dictated the 35 minutes of poses that incorporate animals and nature. An image of lions roaring is followed by the lion pose where children are on their knees and stretch their arms up and roar like a lion. A bubbling volcano is followed by the same pose where children stretch their arms up with their legs apart.

Active exercises such as shaking their bodies like Jello are also part of the mix, and every pose is supposed to relax kids while strengthening and stretching their muscles.

Our daughter paid attention for at least half of the DVD before her attention started to waver. She attempted a few of the poses and was fascinated by the animal and nature sounds like a hissing snake and barking like a dog. We aren’t sure if it made her any calmer, but she did have a good time and now keeps asking to “do yoga” to her disc.

While the children didn’t seem noticeably more chilled out in the end, yoga did amuse them and introduce them to a practice they can use to de-stress when they’re older. For us, that makes yoga for kids a keeper.

—Jennifer Merritt and Rachel Emma Silverman contributed to this article.

No upcoming events for today